The Italian Violinmaking Association (A.L.I.) was founded with the precise intent of promoting violinmaking culture, as can be seen from its statute dated 08-12-1979 and its subsequent modifications. Scholars whose cultural interests are related to the world of violin making or, more generally, to organology and musical research, are members of the Association. Anyone who is interested in violinmaking for any reason may also join.

The A.L.I. has also set up the Group of Professional Violinmakers and Bowmakers. The Group is made up of master luthiers and bow-makers regularly registered with the Chamber of Commerce. Each of them has been admitted to the Group after having submitted to a careful examination their professional curriculum and a certified instrument considered as their “masterpiece (caput laboris)”.

It must be pointed out that these are professionals whose fame goes well beyond national borders. Winners of numerous competitions, the members are present in the major international initiatives and events of the sector, in which they participate under the aegis of the Group.

Since 2006, the magazine has taken on its current form. Its main purpose is to offer A.L.I. members and all those interested in the world of violinmaking useful updates to understand how such an ancient art must, of necessity, make use of recent research in order to consolidate its identity in the contemporary cultural panorama.

Previously published only in Italian, since 2006 the magazine has been published in Italian and English. The translation of the essays is edited by someone who, in addition to having experience of the language, possesses the specific vocabulary of the violinmaking or scientific sector: Francesca and Marianna Musafia.

Particular attention is also given to the environment in which music is played, in the full awareness that the aura, in which the music becomes the object of listening, contributes significantly to directing the listener’s attention towards the timbre of the instrument.

The authors of the articles are university professors, researchers and scholars of clear fame. A particular
particular attention is given to the contributions of young scholars, who can present the results of their research conducted under the careful guidance of their teachers.

The journal also includes some fixed columns, such as that of Mechanics of the instrument by Prof. Enrico Ravina (University of Genoa), and other occasional columns. A column, edited by Dr. Dimitri Musafia (Oltre lo strumento), is dedicated to instrument cases, a subject of interest not only to violinmakers and musicians, but also to culture.

Recently added to the magazine are the columns History of Music and Instruments for Music-Historical Research edited by Prof. Federica Marsico (Ca’ Foscari University of Venice), sections which, due to the great interest they arouse in readers, are consolidating their presence.

Scholars of the sector take care of screening the proposed essays. It should be noted, with particular reference to the specialists who screen the essays proposed for publication, that since 2014 the Scientific Community of Violinmaking of the A.L.I. has been established, whose manifesto is published in the Editorial of n. 2/2014.

It is then up to the Director, Prof. Anna Lucia Maramotti Politi, to decide in which issue of the journal to
publish the essays deemed appropriate for the purposes of the magazine. The aim is to ensure a balance within each issue between texts belonging to different fields and of different interests.

The Director personally contributes to the various issues with studies in philosophy of art, philosophy of the
material-culture and immaterial-culture and theories of restoration and conservation. He provides
In addition, he edits the editorial and the column dedicated to the “W. Stauffer” Foundation, an institution that carries out the work of the Foundation. Stauffer” Foundation, an institution that plays a crucial role in Cremona in the creation of a network of interconnections among cultural entities engaged in artistic-musical research and is particularly attentive to the training of young musicians through the “W. Stauffer” Academy. Stauffer” Academy.

On the A.L.I. website, edited by the secretary of the Professional Violinmakers Group, Ing. Dr. Maestro Liutaio
Marco Brunelli of Pavia, the following are reported:
– the CODE OF ETHICS OF THE PUBLISHER of the magazine: Uggeri Pubblicità s.r.l., Corso XX Settembre, n° 18, Cremona;
– the ORGANS OF THE MAGAZINE;
– the INDICES OF THE PUBLISHED NUMBERS.

Please note that the ABSTRACTs are being published. The aim is not only to ensure rapid access to the contents of each issue, but also to encourage new and fruitful collaborations between scholars and professionals in the field.

Liuteria, Musica, Cultura can be found in many libraries, both generalist and specialized, for example in the Library of the Department of Musicology and Cultural Heritage of the University of Pavia (Cremona branch) and in the State Library of Cremona. 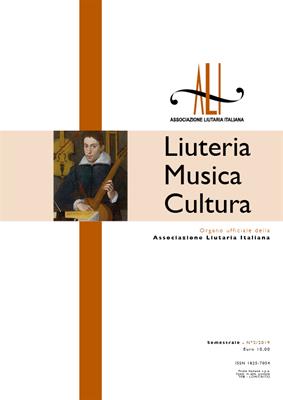 Duties of the Editor
The Editor provides the magazine with adequate resources such as graphic and editorial advice to enable it to perform its role in a professional manner and to enhance the quality of the magazine.
The relationship between the Editor, the Editorial Staff and the Publisher must be firmly based on the principle of editorial independence.

Duties of the Editor
The Editor is responsible for the decision to publish articles submitted to the journal. In his or her decisions, the Editor is expected to respect the journal’s guidelines and criteria for review for publication.
Selected articles will be submitted for evaluation by one or more reviewers who are part of the Scientific Committee, and their acceptance is subject to the execution of any requested changes and the final opinion of the Scientific Committee.
Manuscripts are evaluated for their scientific content without distinction of race, sex, sexual orientation, religious belief, ethnic origin, citizenship, scientific, academic or political orientation of the authors. The Editor-in-Chief, Scientific Committee, and Editors agree not to disclose information about proposed articles to persons other than the author and the Editor.

Authors’ duties
Authors, in proposing an article to the journal, must follow the editorial criteria provided by the Editor.
Authors are required to declare to have written an original work in every part and to have duly cited all the texts used. If the work and/or the words of other Authors are used, they must be properly paraphrased or literally quoted.
The authorship of the work must be correctly attributed and all those who have given a significant contribution to the realization of the article must be indicated as co-authors. Manuscripts under evaluation should not be submitted to other journals for publication.
When an author identifies a relevant error or inaccuracy in one of his articles, he must promptly inform the Editorial Office and provide it with all the necessary information to indicate the necessary corrections.